HOW RICH ARE YOU? Every year we gaze enviously at the lists of the richest people in world.
Wondering what it would be like to have that sort of cash. But where
would you sit on one of those lists? Here’s your chance to find out. Just enter your annual income into the box below and hit ‘show me the money’ 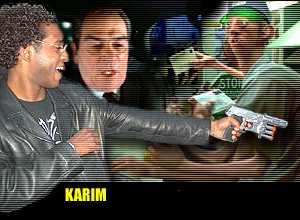 TOO STUPID TO BE PRESIDENT

Surely, there have been smug, duplicitous, rich whelps who have served as President of the United States. But, none of them have been quite as dumb as George W. Bush. The aim of this site is to demonstrate that the Republican nominee is not fit for office solely by reason of insufficient intelligence.

Perhaps, his brain was damaged by a 20 year alcoholic binge. Maybe it was all the alleged cocaine, or even a combination of both the former and the latter. He may have just started life with an inferior processor. A man of his pedigree would suffer from a lack of diversity in his genetic make-up. But, we will not address the possible reasons for his limitation. Such topics are the responsibility of sites like www.ultimatefratboy.net, www.crackheadbush.org, and www.OPECcutproductiontogetmeelected.com.

We will deal only with George W. Bush's present and potential mental capacity.

Some have said this site is mean. But if it's mean, it is only because of the sad truth that George W. Bush is dumb. If he were smart the site wouldn't be mean, it would be silly.

Perhaps as Dubya has said recently, "there ought to be limits to freedom."